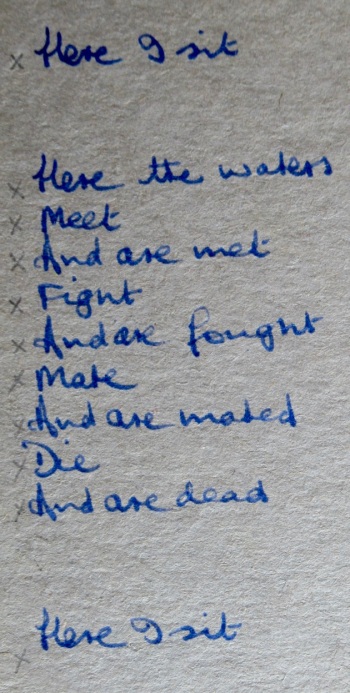 Another photo and poem from this early series (1966) while I still lived in the UK. Like Cervantes, I always wanted to be a poet. Like him, I may always be disappointed by my poetry. However, my beloved has never disappointed me.
This photo was taken at Dodman’s Point, close to where the Spanish Armada was first sighted in 1588. Dodman’s Point / Dead Man’s Point.
In 1988, a computer ran all the tides and all the times of the Armada’s progression up the English Channel, all based on those tides and the annotations of them in the sometimes seemingly haphazard English and the Spanish logs. Seemingly haphazard: because in spite of telling the time by water clocks (clepsidras) and marked candles, and in spite of the ten day calendar difference, and in spite of all the other different differences, these were real sailors and they lived and died according to the tides, the tides that the computer can track, all the way back to 1588, even as it can track the stars and their original positions when Stonehenge was first built in 3500 BCE.
I have stood on the temple mounds in Oaxaca. I have visited Maiden Castle. I have walked on Hengistbury Head and lain in the scrapes of the reindeer people. We underestimate the intelligence of our ancestors and, by extension, of many indigenous people, at our peril. And we over-estimate our own abilities as we destroy the very world in which we live.