The Spanish Christmas comes on the Twelfth Day after our traditional Christmas: January 6, today. 32 years ago, we spent Reyes in Madrid. We arrived in time to see the Christmas Parade and what a sight that was, with the three Wise Men, los reyes magos, riding on their camels at the end of the parade. It had just snowed and the city, streets and squares, shone white.

It’s funny what we remember and how we remember it. “Mira, mira, mira!” “Look, look, look!” Then, in the distance, descending from the Puerta de Alacalá, the Three Wise Men. Behind us, a little boy screamed at his mother. “Don’t you want to see los tres reyes magos?” she asked him. “No,” he yelled. “I don’t believe in the three wise men. I want to go home and watch soccer on the telly!”

I wore a white sweater that evening. When I got back to the hotel, I discovered that every inch of sweater that had emerged from beneath my coat was now grey. Even the air was filthy and pollution lay in ambush everywhere. “Every time I cough, I get a mining souvenir,” Max Boyce used to sing. Well, after a couple of days in Madrid, I too was coughing up souvenirs, but they didn’t come from coal dust underground. They came from the very air I was breathing out in the city streets.

Later that week, we took the train out to the Casa del Campo to see those same three camels in the zoo. In the distance, the Guadarrama stood out clearly against the sky. The zoo welcomed us and we enjoyed breathing in the fresh air and seeing the animals in the wide open spaces behind the invisible bars that allowed us to view them in a more natural habitat.

Christmas / Reyes: a magic time for remembering things that seem to have vanished, yet that sneak up on you and shake you awake when you least expect it. 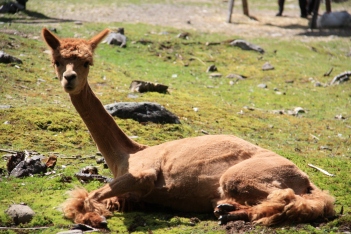