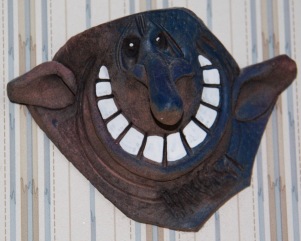 Monkey is growing old and forgetful.

He forgets where he has hidden the key,
pats his pockets, and slows right down
before he eventually finds it
and winds himself up again.

One day, monkey leaves the key
between his shoulder blades
in the middle of his back.

All day long, the temple monkeys
play with the key, turning it round and round,
and winding monkey’s clockwork,
tighter and tighter, until suddenly
the mainspring breaks

and monkey slumps at the table
no energy, no strength,
no stars, no planets, no moon at night,
the sun broken fatally down,
the clockwork of his universe sapped,
and snapped.