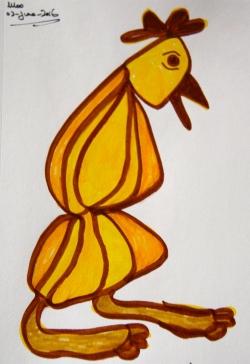 Pen on paper,
words falling like tears,
salt waters that erode
the hardest of stones.

This man bears witness
to thought, word, and deed.
He’s the outsider who sees
the interior world
and drags forth its spirit
for others to see,

not painted in paint,
not sculpted in stone,
not a breeze through
bound river reeds,
just words on the page
lined up in thin lines
to flower and flourish
like an army that conquers
the world of the soul,
and leaves fresh footprints
on eternal snow.

The Three Classical Unities are those of Time, Place, and Action. They are usually associated with classical theatre. It is worth remembering that, in the sixteenth and seventeenth centuries, when poetry and theatre ruled the artistic world of the west, the novel was relatively undeveloped and narrative form was concentrated in epic poetry. In fact, one of Cervantes’s greatest innovations was to draw a parallel between the modern narrative, as he developed it, and epic poetry. “También la épica puede escribirse en prosa,” he wrote in Don Quixote, I, 47. ‘Epic poetry may also be written in prose.’ Lyric and epic poetry had a different construct to the theatre, so it is really the classic theatre that we are discussing here, rather than poetry and prose, though all forms of creativity benefit from a knowledge and understanding of the three unities. Let us look at these unities one by one.

Unity of Time: The play should take place within a time frame of a day, twenty-four hours. This concentrates the action at the moment of maximum impact, or crisis, when the major decisions are being taken. In order to fill in the background details of what happened before, a confidant is often used, especially in French theatre, and this confidential person, or adviser, assists the main characters in coming to their decisions by providing missing background information.

Unity of Place: The play should take place in the same house, as a minimum, and preferably in the same room of the house. This limits travel, and the wanderings of Odysseus, for example, would be impossible in the classical theatre. This is a restriction that was blown away by epic poetry. The narrative forms also rejected this type of unity as they developed, and contemporary film, with its total mobility really reduces Unity of Place to the realms of history and the Absurd.

Unity of Action: All action within the play should be subordinated to the main plot and the main characters. There should be only one plot, but a minor plot is permitted provided it echoes, mirrors, and reflects upon the main plot. Unity of action is interesting in that, to a certain extent, it has remained with us. Television shows, especially police and crime shows, may have multiple actions, but they all link together to form a pattern of events that are linked within a series of unified patterns. It is these patterns of unified action that so often reveal the criminal.

Unity of Theme: Spanish classical theatre, under the watchful eye of Lope de Vega, broke all the unities as established above, but created a new unity: unity of theme. This, too, has demonstrated its longevity and is still with us. Thematic unity is common to all forms of literature and is a binding thread in poetry and prose, theatre, film, and novel. Unity of theme suggests that beneath the surface movement of the art work, there is a thematic unity, a set of deeper ideas, if you like, that provides links to all the action and thought.

Closely linked to these four unities is what I call Unity of Language. Unity of Language is consistent within characters, the way they speak, the way they use language. It is also consistent within a poem or a book. Sometimes it is based on the concept of Associative Fields according to which each word is surrounded by a series of associations (the Associative Field) that links words to each other at one level and to a central theme at another level. The use of Associative Fields is greatest in poetry and those forms of writing that base themselves on poetical repetition. In fact, the Associative Field may be looked upon as a form of repetition that provides emphasis by repeating a theme while avoiding the repetition of the same word within that theme.

I look on the development of art and culture as akin to the movement of a pendulum on a grandfather clock. On one side, let’s call it the right, the pendulum demands rules, immutable rules, and writers that stick to those rules. On the other side, let’s call it the left, there are no rules and chaos reigns in a creative land where the broken rule is the law of the day.

Classicism, in the sixteenth and seventeenth centuries, was followed by Neo-Classicism, in the Eighteenth Century, and this was an even more stultified form than classicism itself. The Romantic Movement, on the other hand, broke the rules of Classicism and brought energy and freedom to all forms of art. As Victor Hugo said: “J’ai mis un bonnet rouge sur le vieux dictionnaire.” ‘I have place a red [French revolutionary] bonnet on the old dictionary.”  Romanticism is Revolution. In art, we need regular revolutions. The next major revolution is always just around the corner. Or, as the pendulum theory suggests, maybe the next revolution, waiting just around the corner, is a swing of the pendulum back from freedom (Romanticism) to restraint  (Classicism).

Certainly we modern authors may exercise our choices in a way that older authors could not. We can and should be aware of all that has gone before us. Knowing the traditions from which we write allows us to write better and to choose better, taking or rejecting that which we want and that which suits us best in our own artistic endeavours.

Miguel de Cervantes comes at truth and lies from a slightly different angle than most of us. In Don Quixote, he writes of verisimilitude (verosimilitud in Spanish) and defines it  in this way: “Tanto la mentira es mejor cuanto más parece verdadera” — The lie is so much better when it appears to be true.

Cervantes extends verisimilitude into perspectivism when an object, for example, the shaving bowl that turns into Mambrino’s helmet, is seen from different angles to represent different things.

Thus Sancho sees a barber’s bowl while Don Quixote sees a warrior’s helmet, specifically that of Mambrino. As Cervantes demonstrates, when both aspects can be held to be true, we are no longer dealing with a direct opposition, truth (barber’s bowl) versus fiction (Mambrino’s helmet). In fact we are dealing with a new reality, that of the basin which doubles as a helmet and the helmet that doubles as a basin. The compromise, in Cervantes’s Spanish, is to invent a new word, a new world, that of the baciyelmo, the first half of which is the basin (baci-) and the second half of which is the helmet (-yelmo). This blends two appearances together to form a new fictional reality upon which the protagonists can agree.

I like to think that this is what we are all doing when we write, forming a new fictional reality to create a new world. We do this when we combine our memories and our imaginations to create new truths. Perhaps it is the fuzziness around the edges, rather than true clarity,  that allows us to penetrate the mist of meaning and come up with the new words and worlds.

For example, some men like facial hair and some men don’t.

I was invited to play an acting role in the local film co-op and the art director asked me to grow a specific type of mustache, something I had never ever done previously. I didn’t want to do it and was faced by a dictat “do it or you don’t get the role”. The AD was a good friend, so I did it. I grew a mustache.

It was the worst mustache you have (n)ever seen and trust me you can be glad you didn’t see it (but you can see it on the film, except I’m not telling you the name of the film). Anyway, when the final words “It’s a wrap” were called, late one Sunday night, my beloved was waiting on the doorstep with a razor and a shaving brush. “Off with it,” she said. And I’ve never grown another whisker since.

Is this a true memory or a coloring of the facts? You’ll never know. What is true is that the art director was amazed at the refusal of many males to grow facial hair.

The film in which I played the role of a domineering theater director was a New Brunswick short (15 minutes). It’s called Misdirection (and is available from the NB Film Co-op). It’s a totally amateur production and was enormous fun to make.

In retrospect, the mustache actually didn’t look too bad … but there’s a very evil glint in my eyes in a couple of scenes. The DoP was using a shoulder held camera and did some great close-ups. I was trying to avoid looking at the camera, but he was so close that I was staring down the lens a couple of times.

More on body hair: I was coaching at the Canada Games one year (once upon a time, a long time ago, in another life) and was moved to investigate the howls of merriment that were emerging late at night from one of the bathrooms in the residence we were all sharing.

I did so to discover, after hammering at the door and demanding entry, that five or so girls were devoting their attention and their razor blades to removing all the body hair of one of our male swimmers so that he could slip through the water with less friction.

It wasn’t exactly a Brazilian Wax, but it was a gazillion laughs: death by a thousand cuts. I am sure the scars slowed the swimmer down. This was a long time ago, incidentally, when the world was young.

Truth or Fiction? Verisimilitude? The closer the lie is to the truth, the more convincing it is. Ask Cervantes: he should know.