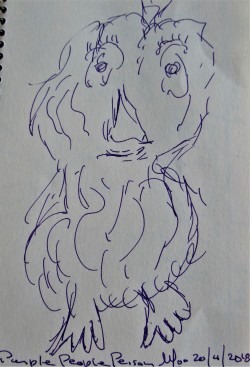 I went on a French immersion course last week. The instructor asked each one of us to address the class for ten minutes in French. When my turn came, I stood up and announced that I didn’t know what to say.

The instructor then suggested I tell the class about my dreams. What do you dream of? I said that I didn’t have any dreams, I just had nightmares, not rêves but cauchemars, you know, nightmares. She asked me to describe my nightmares and I said I couldn’t. So, she repeated, describe your dreams. I don’t have any. Do you dream about your mother? Yes, I said, but I don’t call them rêves / dreams I call them night-mères / cauche-mères, sometimes couche-mères. Couche-mères, the instructor repeated the word.

The look she gave me: finger-nails scraping down a chalkboard. She turned her headlights on me and I sat there, frozen in the twin beams emanating from her eyes. Yes, night-mères, I repeated, because I set myself goals, not just dreams, achievable goals, and then I have night-mères, inspired by my mother, who says I will never achieve any of my dreams, because they are not her dreams, the ones she has for me, and they are the only ones that count.

You are here to speak in French, the instructor said, and you must speak French for another five minutes. So I told the class about the seals in the Parc du Bic in Quebec. The seals are like a plague, I said, like mosquitoes, only bigger and nastier, quite vicious, in fact. So the people who made Off to keep the mosquitoes away designed a new chemical spray that would keep the seals away. Now the French for seals is phoques, and since this is mainly a problem in Quebec, at the Parc du Bic, and not elsewhere, they called their product, you guessed it, Phoque–Off.

It’s quite simple to use, I said. It’s a spray, not an ointment, and you point the spray in the general direction of the seals. Then you squeeze the button and loudly say “Phoque–Off” at which point all the seals slide off their rocks with a little splash and vanish into the sea, leaving you alone on the beach.  I have tried it myself, I tell them, and I know it works so I highly recommend it to anyone who is plagued by seals.

I still don’t know why she threw me out of the class.