Well, it isn’t quite an English Country Garden, but we now have some tall hollyhocks, and I mean TALL holly hocks. My beloved isn’t short, in fact she’s taller than me, but these hollyhocks are HUGE. Douglas Bader and Reach for the Sky are in a similar league. 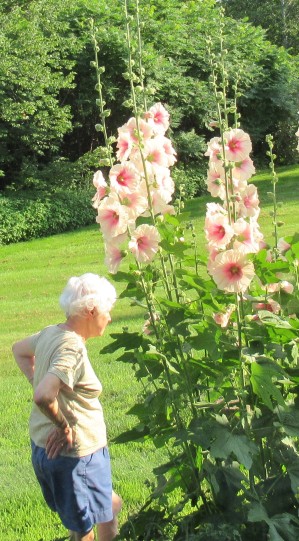 Six, foot, seven foot, eight foot bunch … I guess that was a week or two ago. Looks like an eight foot, nine foot, ten foot bunch to me right now. Maybe I should write the Hollyhock Boat song. I’d need to get someone else to sing it for me though. Somehow, this is my Island View in the Sun, doesn’t quite cut it for me. And I hope I don’t have to cut them. Not until the snow flies start breeding anyway. And that makes me wonder: has anyone ever actually seen a snow fly? I know I haven’t. But then, I’m just an ignorant immigrant. I am happy to admit it. That way, nobody can discriminate against me.

The snow flies? They went that way. This way, that way, all ways lead to the Hollyhocks in Island View. And they are so beautiful. Even painters want to paint them.

Oops, sorry: that was last year’s. And so was this painting: last year’s hollyhock preserved for ever. Well, I am not so sure about that anymore, either. But well done Geoff Slater. And many, many thanks.