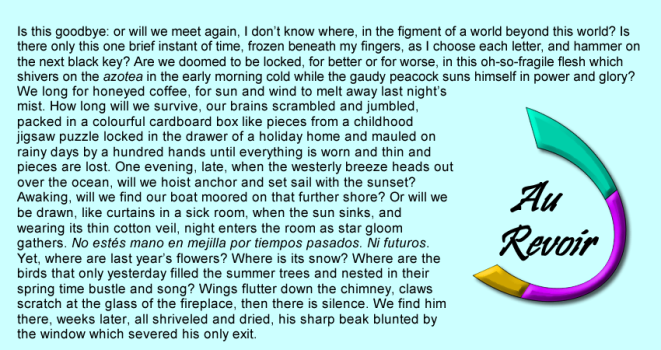 This construction (verbal and visual) dates back to my visits to Oaxaca, Mexico (1995-2001). So many friends, so many happy relationships, and then the world turned and I never went back. I remember doing yoga early in the morning on the azotea. Zopilote, the turkey vulture, wings motionless, flew high above the world, the sun lighting up his wings with its fiery flame. Zopilote, aka Trickster, the bird who stole fire from the gods and brought it back to earth so women could make men their morning chocolate over the old wood stoves or open fires. Or was that all a myth, fake news as some would say today when everything we touch is fake? So much has been lost, destroyed. So much beauty, verbal and visual, has been laid aside, destroyed, and forgotten. Au revoir, good-bye, will we ever see it again? Adieu, goodbye, we will never see it again, it’s gone for good. So much meaning in these brief French phrases, synonyms in English, yet carrying such different meanings in French.

Amarrada nuestra barca a otra ribera … Antono Machado wrote those words. We will awake one morning, he suggested, to find our boat moored on the other side of the river between life and death. And so we will. But in our daily lives, we try to ignore that fact. We seize the day, drowning our sorrows in a sea of forgetfulness: for tonight we’ll merry, merry be, we sing, but tomorrow we’ll be sober. Or will we? And nowadays, who cares anyway? As Seamus Heaney writes “my friends and neighbors, let it flow. We’ll be stood no rounds in eternity.”

Yesterday, I met a man in a wheel chair sitting outside the store where I was shopping. He asked me if I could spare some change and I told him I only carried plastic (true). Then next man who approached gave him a cigarette. My beloved was sitting in the car and I gave her a five dollar bill from the parking money and asked her to give it to the man in the wheel chair. So: how did we feel? Good for an act of charity? Bad for not responding immediately? Terrible that we see people living in poverty in a supposedly rich country? Fearful that one day the money would run out and that we too would be out there, begging for money, grateful for a cigarette, a hand out, a helping hand … happy for anything that would help postpone the inevitable end?

And then there was the bird that fell don the chimney and perished in the fireplace. We never even knew he was there until we found his feathers and his body, lifeless among cold ashes. So which is it to be: au revoir or adieu? Or even worse, the middle finger, the scowl, and the old ‘screw you’?