Doing This for Mom 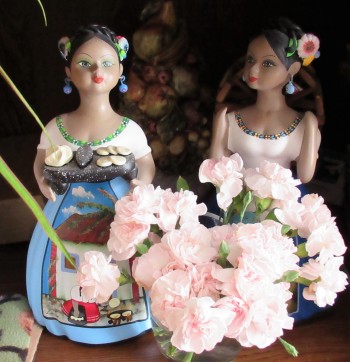 Doing This For Mom

“I have to go pee,” Cindy got off the long-distance bus when it pulled into the lay-by on the way to Heathrow Airport airport, broke away from her mother and her grandfather, and ran to the washroom.

“You shouldn’t let her go in there alone. Go in with her. Go on. But wait, look what I’ve got for you,” he pulled a wad of fifty pound bills out of his pocket, licked his thumb, and slowly counted them. “Eighteen, nineteen, twenty. Here: one thousand pound. Cash.”

“That’s wonderful dad. You’re very generous, but I can’t take our money. Put it back in your pocket.”

“I know things aren’t going that well for you, now you’re on your own. Take the money.” He waved the cash at Tiggy, but she pushed his hand away.

“No dad. I can’t take your money. You need it more than we do. We’ll survive.”

“Listen, dad: I’ve seen how you are living. Hand to mouth. Why don’t you sell the car? You know you can’t drive anymore. You’ll save on the insurance. Sell now, while it’s still working. Throw in a thousand pound sterling and you can have taxis galore for the next couple of years. You can shop when you want. You won’t have to rely on unreliable friends …” Tiggy watched a tear squeeze out of her father’s left eye and slide down his cheek. “Don’t cry, dad. You know I’m right.”

“I’m not crying,” he wiped his cheek with the back of his hand. “Some dust blew into my eye. Look, there’s Cindy. Take the money for Cindy. Please. And tell her to sit beside me on the bus.”

“I’ll ask her if she wants to sit beside you,” Tiggy hesitated. “But I won’t tell her. You can’t buy her affection with money, dad. It takes more than cash to rebuild a broken family. I thought you knew that.”

“Hold this,” Tiggy’s dad thrust the money at her. “I’ve got to go to the washroom. I don’t want to go in there carrying this,” leaning heavily on his stick, he limped towards Cindy as she emerged from the rest area, but she skipped quickly away and out of his reach

“Cindy,” Tiggy grasped her daughter’s arm. “When we get back on the bus, will you sit by your grandfather?”

“No,” Cindy’s face was grey, set in stone. Her nose was a hawk’s beak, fierce in her rejection.

“Grampy doesn’t love me, he hates me,” Cindy ground her teeth. “He never wants me back in the house again. He told me so. That day he banged on my bedroom door. He hates me. And I hate him too,” Cindy’s chest heaved and her breath came faster. “He was always trying to open the bathroom door when I was in the shower, and he peeped at me through the keyhole …” Cindy gulped. “He was always rattling the bedroom door and trying to get in.”

“But Cindy, why did you never tell me about this?”

“I was frightened. He threatened to beat me. Then he said he’d give me money if I was good. Is that the money?” Cindy looked down at the dollars in Tiggys’ hand. “I don’t want it.  Give it back to him. Or throw it away.”

Tiggy strode towards her father hen he returned. “It’s blood money,” she said. “Cindy’s told me everything. You’re just laundering your soul.”

The driver tooted his horn and the passengers returned to the bus. Cindy got on first and took her seat by the window. Tiggy followed her and sat beside her. Tiggy’s father, hesitated, hauled himself in, then slumped by the window in the seat on the other side of the aisle. They all gazed out of their respective windows as the bus pulled away.

About half an hour later, Tiggy needed the washroom. She picked up her purse and headed to the back of the bus. As soon as she left, her father got up and lurched into the seat next to Cindy.

“Cindy,” he tapped her on the shoulder.

“Leave me alone,” she stared out of the widow.

“Cindy, you must listen to me. Cindy, your mother’s ill. She needs an operation.”

Cindy sat, a silent stone. Then: “An operation? How do you know?

“She thought you were too young to know. Families don’t tell everything, you know. Look, take this money. Not for you, for her. Keep it a secret. Give it to her when you’re on the plane. It’ll help pay the fees. Take it now. While she’s gone. I won’t offer again.”

“You were always watching me.”

“I wanted to see you. I’ve only seen you twice in ten years. What did you expect me to do.”

“Is that what will happen to mom?”

“It might. But money for the operation will put everything right. Here,” he put the money in Cindy’s lap. “Sorry.”

“You should have said so before.”

“Can we be friends?”

“Look after your mom,” The old man struggled to his feet and stumbled back to his seat.

When Tiggy returned from the washroom, she looked for her daughter and saw her on the other side of the aisle, next to her grandfather. They were both sitting upright, very stiff, not touching, staring straight ahead into the distance. Tears shone in Cindy’s eyes and a wad of bright new fifty-pound notes bills stuck out of the pocket of her jeans. Tiggy saw her daughter’s jaws clench and un-clench but she didn’t  hear the half-swallowed, mumbled words.

“I’m only doing this for mom.”

Commentary: An old story revived and revised. Let me know if you like it.

4 thoughts on “Doing This for Mom”