Love me …  love my cat. I think she’s bemused by the sudden smell of all those flowers. She didn’t like the snow yesterday, either. Hands up all those who did. Ah yes, all the students and teachers who had their tenth snow day. No wonder the internet was so crowded all day long. It wasn’t that easy to get on and off but it was so easy to lose the connections. Speaking of connections, yet another circular debate is going round and round the Brexit roundabout in London today. That’s London, England, not London, Ontario. Oh the sea, oh the sea, thank God it still flows between Brexit and me. You’ve got to love it though, especially on St. Valentine’s Day: all those basket cases putting all their eggs into one little Brexit basket. They remind me of a set of Oaxacan donkeys, blinkered and blindfolded, walking round all day in circles, trying to grind the maguey or to draw water from an artesian well (una noria). It’s a thankless task at the best of times, but an incredibly tiring one when there’s a drought and a dearth of clear-thinking and intelligence. Round and round and round they goes, and when they’ll stop, nobody knows. Wow, I’m glad I got that off my chest: now I can enjoy Valentine’s Day with my beloved and my cat. As for Valentine’s Day: say it with flowers. 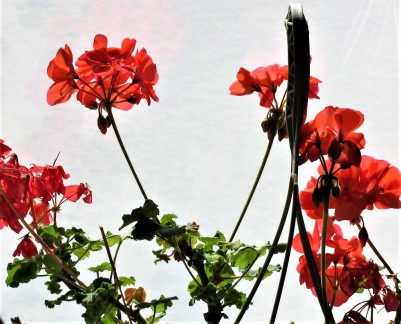 Here are the geranium, a little bit winter-struck, still red-hearted and perky in the post-storm sunshine. I always marvel at how they  settle down, go all green-leafed, then start to blossom again: a miracle of love and kindhearted attention. 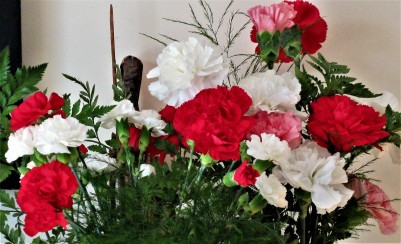 And here’s Don Quixote keeping vigil just behind the carnations. Oh Brexiteers, he stands on guard for thee. He’s very quiet though. Not sure about anything, except the need to guard the flowers from fear, fire, and foe. He’s a good man, is Alonso Quijano el Bueno. He doesn’t round round in circles and lose sleep over uncounted and uncountable, slaughtered sheep. Speaking of which, the Welsh are campaigning for Welsh Lamb. They do not wish their products to be labelled with the Union Jack, but with the Red Dragon of Wales, Y Draigg Coch Cymraig. I hope I’ve got that right: it’s been so long. Meanwhile, speaking of love, Northern Ireland is talking divorce from the UK and a renewed marriage with the south. Scotland is talking love-talk with the Europeans and muttering about separation (was it really 1606?) from the Union. And Plaid Cymru is once again flexing it’s separation muscles. For how much longer, in the current state of division, will we be able to talk of a United Kingdom? Valentine’s Day: it’s best to be off with the old love before you are on with the new. Yet there’s mucho flirting going on between many possible future partners, even while undying love is being spouted across the various negotiating tables. The Queen of Hearts rules on Valentine’s Day: “Off with their heads!” Oh dear, whatever will the little caterpillar say, let alone Malice in Blunderland?

And the cat came back. Thank heavens. I cannot imagine Valentine’s Day without some flowers, my beloved, the cat, and a great deal of love and understanding. May the joys of red flowers and open hearts (not the surgical kind) be with you this day, and may you find a ray of sunshine to sit in for the rest of what still promises to be a stormy and snow-filled winter. 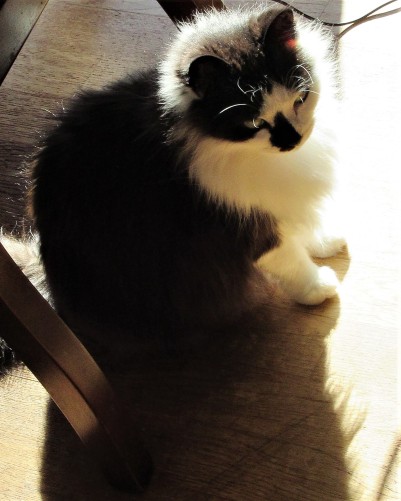