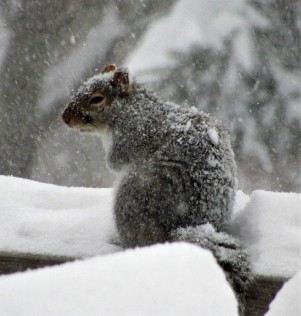 He’s here for the food on the picnic table, of course. He’s been here before, even in bad weather, and he knows where the treasure is: buried beneath the snow. I can’t believe he’s out in this. He should be in some little squirrel cave, tucked in, nice and warm. One of my best friends told me he was going to drive to Halifax today. What drives people out on a day like today when the snow is deep and still accumulating, when visibility is such that I can hardly see beyond the trees at the edge of the garden, when more snow, higher winds, drifting snow, and blizzard conditions are all around us. There is also the possibility of ice pellets and freezing rain when the snow finishes. “Stay home, little squirrel, stay home,” I told him. “It’s not a good day for travelling. I can hardly see the road through the falling snow.”

Squirrels are tough, though. They must have Welsh blood in them the way they tunnel and dig. Unsnubbable on the trail of some winter seed and totally defiant against wind and weather. “Did you see him?” my beloved called out. “See who?” I asked, clicking away busily with my Christmas camera. “The squirrel,” she said. “You should take a picture.” So I did. And another and another. I caught him first head down, back towards me, guzzling, deep within his snow cave. 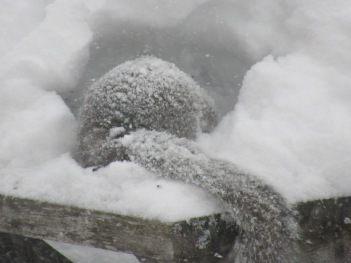 He reminded me of Lorca’s roosters: “Los picos de los gallos cavan en busca de la aurora / the roosters’ beaks dig in search of the dawn.” I wanted him to come out and look at me, to show me what he had found. I didn’t have to wait for long. Then it was in (click) and out (click). What a cheeky chappy. 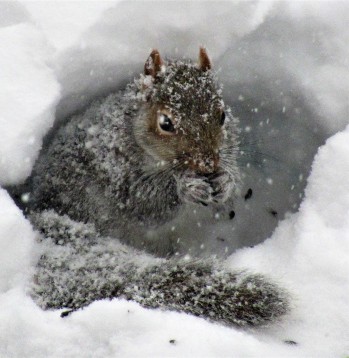 I wonder why I always call this squirrel ‘him’. Maybe I never learned enough about the birds and the bees when I was a child. I find it hard to tell the difference between the genders of animals unless they have antlers (male) or, like the birds, they have distinctive plumage. Then it is much easier for me to tell them apart. I had a tortoise once, back home in Wales. I called him Henry, don’t ask me why. It took me two years to find out that Henry was actually Henrietta.  I guess I was slow on the uptake. Dai Bungalow: not much in the top storey. Or should that be story? There, I’ve looked it up:  storey in the Oxford Dictionary’s English English, but story in Webster’s American English. Oh dear, there are some things I still have to look up. 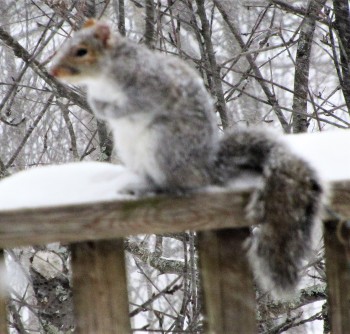 So there he is, Mr. Squirrel, perched on the balustrade, about to make his final farewell. Fare well, Mr. Squirrel. Come back soon. I am so glad you didn’t decide to drive to Halifax.