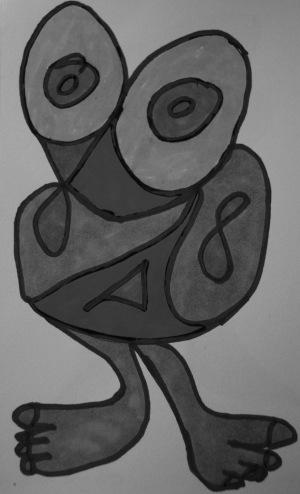 The crocodile lives in the wind-up gramophone. The gramophone lives in the top room of the house. The boy winds up the gramophone with a long brass handle, round and round, till the spring is tight. A tight spring frightens the crocodile and he sits quietly in his cage. But as the record goes round and the spring loosens up, the crocodile roars and demands to be freed. He’s the Jack that wants to jump out of the box. His long-term dream is to eat up  the witch who looks out of the window and watches the boy as he plays in the yard.

Last week the boy decided to dig. He picked up a spade and dug a deep hole that went all the way down to his cousin in Australia. The little dog laughed and joined in the fun, scraping with his front paws and throwing earth out between his back legs like happy dogs do. The witch in the window cackled with laughter and the rooks in the rookery rose up in a cloud and cawed in reply. Only the boy is able to see the witch and he only sees her when she sits in the window. But he knows she wanders through the house, and the air goes cold when she enters and exits the rooms, especially when she brushes past the boy and sweeps his skin with her long, black gown.

When the boy got tired of digging, he drove the spade into the ground and left it standing by the hole. When his father came home it was well after dark. He didn’t see the hole but he saw the spade. So he didn’t fall in to the shaft of the coal-mine that went down to Australia. No free trip to the Antipodes for that lucky dad. He beat the boy for that, for digging that hole. Then he beat him again for lying: the hole didn’t go to Australia. Australia was too far away and the angle was wrong. The boy laughed when he saw that his dad didn’t know where Australia was.

“Ha-ha,” he laughed. And his dad beat him again, this time for laughing.

Sometimes at night the boy can hear rats running through his bedroom walls. They scuttle and scuffle as they hunt through the guttering. The crocodile growls from time to time in that upstairs room. The witch cackles with laughter. The boy puts his head under the blankets and cries himself to sleep. Sometimes he wishes the crocodile would come and eat up his dad. But he loves his dad like the dog loves his dad even though his dad beats both the boy and the dog. Sudden beatings, they are,  that arrive without warning: hail and thunder from a sunny summer sky.

“Well, you’re not laughing now,” his father announces. “A beating a day keeps disobedience away.  There will be no disobedience in this house.” When the father beats the boy, the dog cowers beneath a chair. The boy hears the crocodile growl and smiles through the tears as he wipes salt water from his eyes.

“Are you laughing at me? I’ll make you laugh on the other side of your face,” the father taunts the son and beats him again.

The crocodile growls. The old witch cackles. The rooks in the rookery rise up in the air and the father’s hair stands up on end like it does when lightning lights up the sky, and thunder rolls its drums, and the sky’s wheels rattle like an old warrior’s chariot whose wheels have not been greased. The veins stand out in his father’s cheeks as the old man raises his hand to the boy.

The old man tells the same old jokes again and again. The boy must always remember to laugh at them as if he had never heard them before. If he doesn’t laugh, his father gets angry. Some of the jokes are good, and the boy likes the one about the Catholic who goes into the bar in Belfast and asks the barkeep if they serve Protestants. Or  is it the one in which the Protestants go into the bar and ask the barkeep it they serve Catholics … anyway … whatever … one night, the boy dreams and it happens like this. The crocodile escapes from the gramophone. The witch hands the boy a leash and a collar and between them they restrain the crocodile.

The crocodile nods his head and crocodile and boy walk down the street to the Kiddy’s Soda Fountain on the corner.  When the boy walks in with the crocodile, the waitress raises her eyebrows and opens her mouth.

“Do you serve grown ups in here?” the little boy asks her.

“Of course we do,” says the waitress.

“Good. I’ll have a glass of Dandelion & Burdock for myself and a grown-up for the crocodile. Please.”

The witch says grace, the boy sips his Dandelion & Burdock, and they all shed crocodile tears as the boy’s pet crocodile chomps on the fast disappearing  body of the boy’s dad.