People of the Mist 2 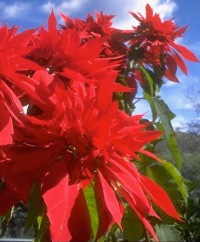 … dream worlds circle outside the window in a starry sky where two moons float …  inside the bedroom, grey scalpels shaved from black obsidian inscribe red gashes on white-washed walls … the slashes turn into tulips that scrape sharp fingernails across the paint and send blood scuttling down to the floor … against a background of granite and trenchant shadows, twisted dancers, themselves old warrior kings bend themselves into pipe wire shapes as they struggle to escape their carved imprisonment … around and above them, the temples of Monte Albán tower and threaten … high priests in long black robes gape at the sky from their sanctuary in the observatory as three young women walk at an angle up the pagan temple steps … when they reach the top, a moonbeam holds them in its spotlight and they wax with the full moon’s beauty …  the doorway to an unclosed grave opens its crocodile jaws and three women descend the temple steps, ageing as they walk … they enter the tomb’s dark mouth … an old man in a faded suit follows them in … the grave swallows them and buries them in the hidden depths beneath the mound …

Down below, in the courtyard of Tim’s residence, the handy man tumble-dried a TV ad in the washing machine of his song sparrow throat. He gargled with gravel and churned stony lyrics skywards until they grated at Tim’s bedroom window and tried to drag him from his dreams.

… dream shadows back themselves into a cul-de-sac, a wilderness of harsh black scars … Tezcatlipoca catches Tochtli the Rabbit by his ears and throws him against the second sun that sizzles in the sky … his sharp teeth burrow, burying themselves deep in the fire’s red light … the second sun loses its fire and turns into the cold stone of the moon …  Tochtli’s face, the rabbit  face of death, simmers in the moon’s dwindling pool … a white rabbit, pursued by death’s hounds, scampers down a narrow escape tube through the deep dark tunnel of an earthen throat that allows him to escape from the hunter’s teeth …

… with a clicking of claws, knitting needles come together to lift the dreamer outwards and upwards towards death’s golden guillotine floating in the sky … the moon sharpens its knife edge on the keening wind and sets the dreamer’s blood tingling from toes to head … the dreamer desires to be free, free from those nightmares, those nocturnal visions that rise up from the past and stalk him as he lies in bed … he longs for the alarm clock to shuffle its pack of sleepless hours and to waken him with its piercing shriek as it tears him from these winding sheets, these grave clothes in which he lies … he  waits for the sun to shine into his window … he wants it to waken the bright jungle parrot that sleeps in the yard so that querulous caged voice will scatter night’s drawn curtains of clouds and drifting dream ….

The first waves of sunlight broke over the houses and Tim’s dreams began to fade. As the new day dawned the black bat of night flew back to its distant cave. Light fell, in the yard below, on the parrot’s cage where the bird clung to the bars, and “¡Loro, loro! I’m a parrot!” the caged bird shrieked at the sky.

New visions crawled out from the vellum codex left open last night on the table and red and green gods with black and white masks crawled through Tim’s drowsing mind. He linked them together with lines and arrows and made a silent vow that his life would never again be scarred by their furrowed frowns and secretive smiles.

The day’s first rocket climbed its ladder of sky to fizzle and smash at the gods’ front door. A second rocket extracted him like a tooth from the socket and drew him fully into daylight. The third explosion sounded much closer and a fourth rocket soon surged skywards. The fifth and sixth rockets were two fiery giants with arms reaching up to claw with their fingers at the sky.

Tim thought about getting up to see if the rocket delivery mailman was one of his neighbors, but last night’s mescal still swaddled him in lullabies and he couldn’t get out of bed.

… whoever the man is, the half-dozen rockets he has purchased have been expended now and he’ll soon be home ... maybe I can roll over and go back to sleep …

As Tim thought this, he heard the swoosh of the seventh rocket.

“Seven,” he said out loud, sitting up in bed.  “That means five more. Nobody buys a dozen rockets, unless it’s something very special.”

Tim pulled back the sheets and swung his legs out over the side of the bed. He looked out of the window. Down below him, in the street, his friend Alonso, the archaeologist, walked side by side with El Brujo, the witch doctor. Alonso held a bunch of rockets in one hand while El Brujo opened and closed a box of traditional Oaxacan wax matches. Alonso readied a rocket in his right hand and El Brujo scratched match against sandpaper and applied flame to the rocket’s blue paper. With a flash and a whoosh, the rocket soared into the air.

Alonso and El Brujo stopped, looked up towards Tim’s window, and waved.

“Come down and join us, Tim,” El Brujo called. “We’ve got a surprise for you. There’s something we want to tell you.”

Tim saw three women and a man in a suit turning the corner at the end of the street. The shadows they cast in the rocket’s red glare were those of sinuous worms slithering along the cobbles. Tim shook his head in disbelief and moved away from the window. A sudden nausea gripped him. He went to the bathroom, gagged, knelt before the toilet bowl, put two fingers down his throat, and threw up. Six wrinkled worms swam round and round leaving a thin, yellow smoke trail in the flush’s whirlpool.

Tim got to his feet and hurried back to the window but the street was empty. Before he could turn away, rockets number eight and nine climbed out of unseen hands and soared upwards to knock in mockery on the doors of the celestial gods.