His cold hand squeezes a broken razor blade between index finger and thumb. His fingers remember how the blade slips along the grain of the balsa wood to carve the ligament and bone that builds the airplane. Using the same technique his fingers invent new ways to test his wrist’s pale flesh. Pins and needles dance their electric shock along a cold cut of sliced skin. A red rivulet seeps to the surface. Lips pinch. Teeth clench. The blade sinks deeper. An icy fire: the cold that burns, the heat that freezes, fire on the flood, and the red blood spurts.

Cold sweat flows, thickens, then dries. A voice inside his head cries out to the emergency numbers on his frozen cell phone but his fingers no longer respond to his mind’s dark urgings. Is this the beginning of the end? Is it the beginning of a world without pain, amen? A century of centuries flash through what’s left of his mind in a single second.

Eternity: that long, dark, endless, winter night — no stars, no sun, no moon, no spark, no hope, just this eternal cold that holds all motion suspended.

Somewhere, within his rib-cage, his heart is a caged animal raging against the white-bone bars. It sees. It senses. It smells the fear that falls to his feet and flows out from his armpits. Nostrils flare and stiffen in a bestial desire that flesh holds for fresh torn flesh. A black velvet band binds eyes, ties hands at the wrists, and pulls itself tighter and closer across his chest. His heart, a stone now, cast into an icy pond. As it descends it bumps into the bodies of vestigial memories that have been here before.

Somewhere in this Arctic night white pads shuffle as sleek feet move across the snow. The polar bear’s snuffle is a whimper of hope that his end will come swiftly in the bright light of midnight descending, all red in tooth and claw. The nightmare draws closer, ever closer with an acquiescent shuffling of feet. Face to face, present and past are ambulant tenses that foretell no conditional. He has no future, let alone a future perfect. A dislocation of infinitives stretches into an intangible infinity.

Lips move and promise an end to heat and cold. Here, they say, is darkness without memory; here is sleep bereft alike of nightmare and dream; here is oblivion; here is the cessation of strife and struggle; here is peace. 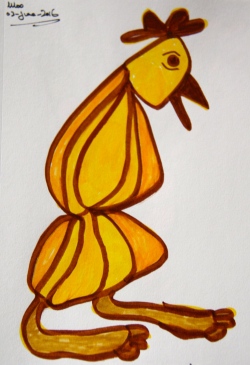