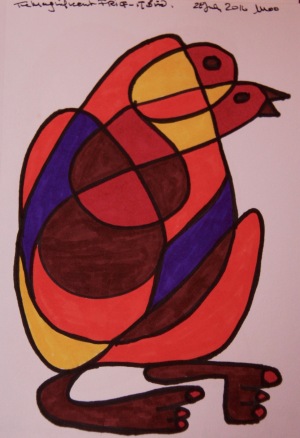 What the left hand does
when the right hand doesn’t
know what it’s doing
is an attempt to re-pattern
the brain, to slow it down,
as the pencil spider-walks
its wandering way over the page
like my father’s did when,
stroke-stricken in the right hand,
he transferred his pencil to the left
and sought to-re-establish control
over tiny, manageable things,
and yes, he often cut himself
shaving, but he didn’t like beards
so he never gave in and shaved
every day, died fighting,
and did not go gentle,
and neither will I.

Comment: This is a very raw poem, in more senses than one. I fell over on Tuesday, on the back porch. One of the porch nails, forced up by the winter ice, caught in my open-toed sandal and over I went. My head had hit the deck before I even knew I was falling. It wasn’t as bad as the tumble I had when chasing the black bear and trying to photograph it, but this fall left me quite stunned. You can read about the fall HERE. The actual bruising, not the fictional ones, can be found in #3 of that sequence. I wrote the above poem, on Thursday evening, with my left hand, while my right hand was being iced. Funny how we think of one thing while doing another: I had visions of my father, stroke-stricken as I say, trying to write with his left hand. He fought so hard to do just the smallest things. Oh yes, I have a nice bump on my head, too, and as I told the chiropractor when I visited her later that Tuesday afternoon: “I think I have already had my back adjusted once today.” The other thought that comes to me: how slow we are to heal, once we pass a certain age, or, as my good friend Jan the Stoneist says, “an uncertain age.” With that latest fall, I have indeed entered into The Age of Uncertainty.