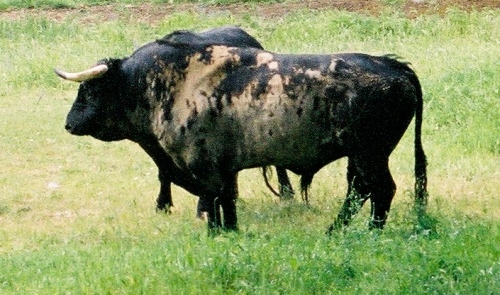 In the pearly morning light, before the sun had burned off the mists from woods and fields, Jim contemplated the breakfast potential of the mushrooms pushing their stubby skulls through the damp grass. Jim refrained from gathering any until he came across a mushroom as large as a stepping-stone. He lifted it up with great care and placed it in the canvas bag he carried. Then, casting his glance from side to side in search of the best of the crop, he continued to wander along the faint path that led downhill to the field below.

Dai Jones, the farmer, was plowing a neighboring field into earthen waves that disappeared in the morning mist. His sheepdogs, Floss and Jess, ran free between the furrows of fresh-turned earth.

“Watch out for that bull,” Dai called to Jim, as he turned the tractor by the dry stonewall. “He’s loose in that lower field. He’s in a bad mood this morning.”

The roar of the tractor accelerating out of the turn swallowed Dai Jones’s last words.
Jim bent to collect another mushroom. Downhill he walked, following the path as it led him through the mushroom patch and toward the lower field. He stopped at the gate and gazed towards the trees where the mist gathered its folds. Night still dwelt in that woodland temple and the field seemed empty. Jim opened the gate and walked through, closing it behind him.

Jim wasn’t afraid of Dai’s bull. He had met bulls before and had never had any problems with them. He had holidayed in Spain one year and at the village bullfight he had vaulted over the protective barrier with two of his drinking friends and found himself face to face with a fighting bull. It wasn’t really a fighting bull. It was a young bull, a novillo with padded horns, all the village could afford, but he well remembered how the animal sensed his presence, raised his horned head, pawed at the ground, and charged.

Jim recalled the elation of flying, of side stepping, of turning aside from the novillo‘s uncontrolled rush. The villagers, aficionados all, began by laughing at that teenager thrust into a sacrificial, prehistoric culture. But Jim stood his ground, unafraid, and allowed the novillo to come towards him, again and again, before dancing merrily away.

The novillo became furious. It charged with less and less control, and, as it tired, Jim’s two friends combined with the villagers who jumped the barrier to catch the novillo by its tail and drag it snuffling and snorting from the ring.

Later, after the bullfight, Jim met another bull. Its horns and head were fixed to a wooden frame crammed with fireworks and carried on the backs of six large men. When the village clock struck midnight, this carnival bull charged into the square where the villagers were dancing. The bull’s wicked glass eyes flashed, the fireworks exploded, and sprays of bright sparks spurted from the bull’s wooden back. The six men whooped and bellowed, and everybody, except Jim, pretended to be afraid and ran.

As he knelt to gather another large mushroom, Jim remembered the holes burned in his sweater by those bright sparks. He knelt there and the early light cast a luminous spell around him. It was as if he knelt at prayer, just like a bullfighter, en capilla, kneels and prays in the bullring chapel before his entrance into the ring. But Jim wasn’t afraid. He wasn’t affected by any mystery or myth, what he called ‘the bullshit of the bull’.

Within the mist, his bulk enlarged, his horns sharpened and curved, Dai’s black bull also knelt, snuffling gently, sensing Jim’s presence. Then the bull heaved his bulk slowly upwards until he reached a standing position. He couldn’t see Jim through the mist, but he sensed him, heard him breathe, and knew exactly where the young man was. The bull scraped his horns in the mud and pawed the ground.

Lost in his memories, Jim picked his last mushroom.

He looked up with astonishment when the black bull charged.

Jim’s world ended in a whimper as the bull’s sharp horn drove into the young man’s chest cavity, lifted him from the ground, severed the aorta, and pierced his heart. 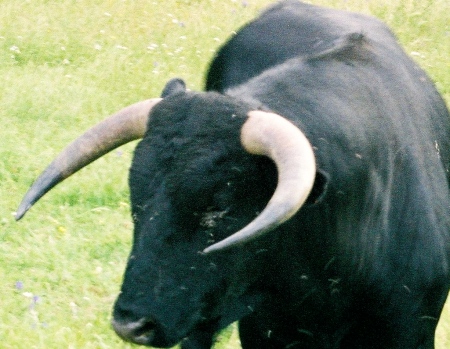