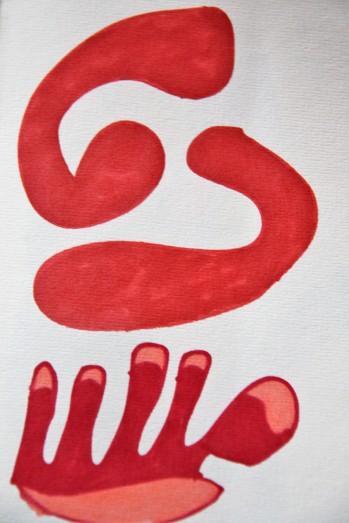 What I really mean is, with apologies to Pink Floyd: “we don’t need no education.”  Actually, I am rather ashamed of this cartoon. When I drew it, I called it “Pussy Grab 100.” I was thinking of the need for sex education in schools and at all levels of society. Then I thought of all the ways in which people were actually learning to abuse each other, rather than learning what ‘the other’ is about and how to get on with her or him or them. Sometimes we forget that man is born of woman, not the other way round, in spite of the mysterious magic of the legendary Adam’s Rib. And remember: there was only one Adam and only one rib. In addition, not many people, adults or children, leap full grown and  fully-armed from the thigh of an Alpha Male Greek or Roman god. Respect for the mother and the potential mother, surely this is the first thing that every child in every walk of life must learn.

Men should be learning to treat women with dignity and respect, not to trample upon them and abuse their rights. Women should be learning to respect themselves and their bodies. In my book women should maintain control over their own bodies. If there is indeed an international code of human rights, and if it is indeed still being respected, then surely we should be thinking of a parallel international code of women’s rights. It would contain the right to self-determination, the right to be protected, not by superior male members of the same family, but by a code of laws that allow women to move forward as independent human beings with inalienable rights of their own. These would include  a right to health care for themselves and their off-spring, a right to education and self-education for themselves and their children, a right to a space in which to bring up their families in safety and in harmony with the earth and its more humane principles.

I hear a whisper in my ear … but the principles under which human beings live are the laws of the jungle, nature red in tooth and claw, might is right, entitlement to the amount of justice that humans can afford to purchase, the right of the powerful to grab everything they want and make it their own, the right of the male head of the family to determine the fate of his women and off-spring, the right to attend male sex education classes that begin with Pussy Grab 100 and continue with a series of lessons that would make the venerable Marquis de Sade blush and turn over in his grave. And remember, while the Marquis de Sade wrote in impeccable French, such modern day lessons can now be found online, in verbal and visual form, and for free.

Democracy: for me, one of the keys to democracy is the way in which the majority treats the minority (or minorities) over which it has gained power. Is there an understanding of the minority point of view, consideration of the needs and desires of the minority? If so, then democracy functions. If not, then cultural rights, language rights, educational rights, human rights are swept away, legislated out of existence, scattered like leaves before a hurricane force wind that shows no mercy. When that happens, we have de-mock-racy not democracy. When de-mock-racy happens, it’s winner take all, and may the gods help the hindmost to help themselves to scrabble for whatever remainders they can glean.

Here’s a link o an earlier post on the meaning of The Other.