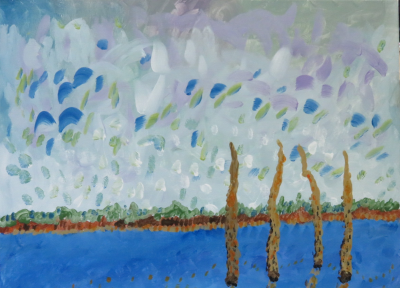 Late last night, I opened Alistair Macleod’s book The Lost Salt Gift of Blood and I re-read the first story. I was soon dabbing my eyes with a tissue and blowing my nose.

This morning, I want to destroy everything I have written. I know I don’t possess the verbal and emotional genius of the great writers and I sense that I cannot write like them. Graduate school taught me to be passive, not active, and to write impersonally, choking every emotion when I write. Academia also taught me how to kiss and how to run away with my thirty silver pence. “Never challenge the status quo,” my professors told me. “Learn the rules and disobey them at your peril.”

But here, in this private space where I create and re-create, there are no rules. The enemy is not clear any more and the fight is not one of black against white. It is rather a choice between diminishing shades of grey, and all cats are grey in the gathering dark that storms against my closing mind. Should I destroy all my writing? I won’t be the first to do so; nor would I be the last. And I won’t be the first or the last to destroy myself either. Intellectual, academic, and creative suicide: as total as the suicide of the flesh.

I carry on my back the names of those who have gone on before me as if they were a pile of heavy stones packed into a rucksack that I carry up a steep hill, day after day, only to find myself, next morning, starting at the bottom once again. But this is not the point: the point is that if I cannot write like the great writers, how can I write?

I think of Mikhail Bakhtin and his cronotopos, man’s dialog with his time and his place. I have no roots, no memories, and that is where my stories must start: in the loss of self, the loss of place, the loss of everything. I was uprooted at an early age, soon lost my foundations, and only survival mattered.

I look at the first page of one of my manuscripts. My writing manifesto is clear before me: “And this is how I remember my childhood,” I read. “Flashes of fragmented memory frozen like those black and white publicity photos I saw as a child in the local cinema. If I hold the scene long enough in my mind, it flourishes and the figures speak and come back to life.”

I am aware of the words of T. S. Eliot that “every attempt / is a wholly new start, and a different kind of failure / because one has only learnt to get the better of words / for the thing one no longer has to say, or the way in which / one is no longer disposed to say it” (East Coker).

Are these stories an exercise in creativity or are they a remembrance of things past? How accurate is memory? Do we recall things just as they happened? Or do we weave new fancies? In other words, are my inner photographs real photographs or have they already been tinted and tainted by the heavy hand of creativity and falseness?

The truth is that I can no longer tell fact from fiction. Perhaps it was all a dream, a nightmare, rather, something that I just imagined. And perhaps every word of it is true.

I no longer know.